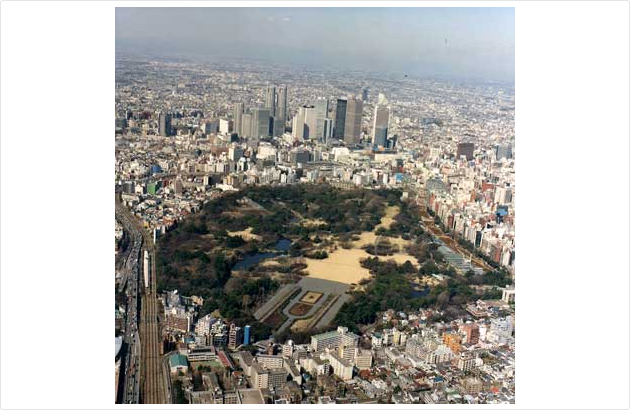 Shinjuku City is a multi-faceted town, with a bustling shopping area at the East Exit, rows of high-rise office buildings at the West Exit, a quiet residential area in Ochiai and a stone-paved street with traces of history in Kagurazaka.
It is said that the urbanization of Shinjuku dates back to 1636, when temples and shrines changed location to the Yotsuya area in the city of Edo with the construction of the outer moat of the Edo Castle.
With the development of the Koshu-Kaido Avenue, the Naito Shinjuku Lodge opened its doors to business in 1698, the middle of the Edo Period, and prospered as one of the four leading inns in Edo.
With the development of the railroad system from the Meiji through the Showa Periods, public transportation linked the metropolis with the suburbs and urbanization progressed further. However, the much was destroyed by the flames of World War II.
After the war, the progress of urbanization made Shinjuku the new downtown district, and continues to grow rapidly today as a center of international information and culture.
A town of remarkable growth as a new downtown district, a town with many cultural assets and traditional events, a town where many people lead active lives together…This is Shinjuku!

Since the shape of the land consists of plateaus and lowlands, the city can be divided into the following: the Toshima plateau area, the Yodobashi plateau area and the lowland “shitamachi” business areas. The Toshima and Yodobashi plateau areas include the plateau areas of Yotsuya, Ushigome, Tsunohazu, Kashiwagi, Okubo, Totsuka, and Ochiai, while between each of these plateaus are the lowland “shitamachi” business areas.
The land peak within the city is Hakone Hill in Tokyo Municipal Toyama Park, where the altitude is 44.6 m. The plateau areas have an average altitude of 30 m, while the lowest altitude in the low-lying areas is in the Iidabashi area at 4.2 m. By comparison, the altitude of Shinjuku City office is 32.55 m. The geological layers of the plateau area from the surface consist of the loamy layer of the Kanto Plain, the Musashino sand layer and the Tokyo layer. The geological layers of the lowland area consist of alluvium and the Tokyo layer. Both the Plateau and Lowland areas there is Miura layer underneath the Tokyo layer.